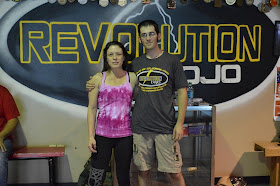 For the next part of my Texas trip (full write-up here), I met up with yet another awesome blogger, Jodi, straight from the bus station. I’m really enjoying having the opportunity to talk at length to all these amazing people, who without fail have been incredibly nice to me. Jodi drove me around without complaint for what must have been hours, not only going to the station, but from there to the gym and then onwards to Conor’s house, which she repeated several times over the next few days. Thanks for being so generous with your time and petrol, Jodi! :D

Jeff Messina likes to have a theme for his classes, which is something I wish was common to more schools. The theme while I was there was the triangle, so the warm-up drills were focused on that as well as the techniques. I sat out much of the warm-up due to my injury, as did Jodi, who has unfortunately hurt her knee. I joined back in a bit later, with an interesting triangle drill from inverted guard, which also works hip movement.

Lie on the floor with your head pointing towards them. Grab both of their sleeves. Swing your leg up into their opposite armpit, then use that to swivel around, making sure you spin towards them. Kick the leg through, using it as an anchor point to pull yourself into a triangle, the other leg going into their neck, after which you can lock up the submission. I could only do it on one side, unfortunately, but a great drill either way.

Next up was a relatively standard triangle set-up, where you use a scissor sweep motion to move into the triangle (similar to what Scott McVeigh showed in Glasgow a while ago). Grab their collar and sleeve on the same side, then still on that side, also push their hip with your foot. Bring the other knee across their other arm, as if you were going for a scissor sweep. Use the combination of that leg pressing with your grips to dislodge their grip on your jacket on trousers, swivelling the leg around so that it wraps around their neck. This should also pull them forward and break their posture, particularly as you’ll also be pulling their collar and sleeve. Use that broken posture to bring your other leg into play to lock up the triangle as usual.

The next set up was definitely not standard, building on the warm-up drill. This time you have a lasso spider guard. You have the lasso and are grabbing both sleeves. Switch grips, so that you pass the lasso sleeve to your other hand. Grab their collar with your free hand. Just like the earlier drill, spin through, kicking your lasso leg for the triangle. Keep your other leg so the shin is up on their thigh, pushing off that for the rotational energy. You want that knee to be there as a barrier, so they can’t drive forward.

Once the leg is up, you can control the back of their head with your knee before swivelling it into place over the back of their neck to cinch up your triangle. Jeff then showed the same motion, but this time in half guard with a spider guard grip. The technique is the same, except that you first have to free you leg from between theirs, by making space with your grips. 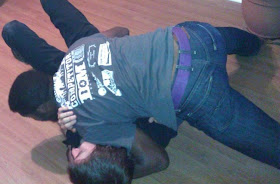 I finished off with some light sparring, for which Jodi was the perfect partner. We're both injured, so neither of us was going hard. Once again I was working my guard retention, as well as playing a bit with top side control, including the ‘Relson grip’ Mikal had shown me the day before while I was having dinner at his house. I didn’t try the heavy cross-face Mikal also demonstrated (as per pic: your bicep goes into their jaw line, to make certain they can't turn their head towards you), but showed it to Jodi afterwards as we were talking about side control grips. Jodi had some nifty passing and made me aware I need to be careful of my collars. She wasn’t far off choking me, so I must always be cognisant of that danger. ;)
slideyfoot at 21:00
Share